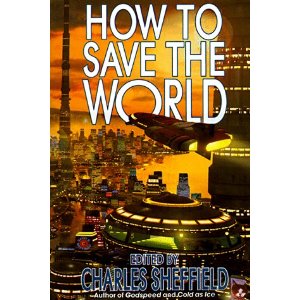 At some point in the 1990s -- I don't remember exactly when -- the late Charles Sheffield informed me that Tom Doherty, mastermind of Tor Books, had asked him to edit an anthology of stories about science fictional solutions to real-world problems. The project didn't have a title yet -- they were calling it "How to Save the World" for the time being, but it would obviously need a better title than that eventually.

I thought it was a great premise for an anthology, but what did I know about saving the world? I'm just a writer. But there were a couple of real-world problems that looked as if they might cancel each other out in a really ugly way, so...

There isn't much more to say about the story. It's pretty obvious where it all came from. It was the only way I could see to get into the anthology, so I wrote it, and Charles bought it. He said some very nice things about it, in fact.

In due time the anthology was published, as How to Save the World -- they never did come up with a better title.

I had some vague hope that the story would get some attention, but it didn't. Them's the breaks. I took a look on the web just now and discovered that the anthology's long since out of print. The only description I found that mentioned my story was favorable, but assumed it was set in the Middle East; while I'd deliberately left it vague, I'd thought of it as being set in sub-Saharan Africa. Could be either one, I guess.

The story's been published twice so far, in How to Save the World and in my single-author collection, Celestial Debris. Beyond that, I don't have anything to say about it.