In the 1990s I was active in horror circles -- hell, I was president of HWA for two years. I'd started writing horror in 1988, and wrote a lot more after my mother died in 1990; then around 1997 I sort of burned out on it and mostly stopped.

But in the 1990-1997 period, I was very involved with it, and I wanted to break into as many horror markets as I could, including Mark Rainey's Deathrealm.

I also had this image stuck in my head of a house sinking into the earth, so I wrote a story based on it, "Back to the Land," and sold it to Mark.

Shortly thereafter he talked me and Terry Rossio into refinancing Deathrealm, and we wound up partners in Malicious Press, which bought the magazine but left Mark in charge. As a result, by the time he published the story (in #24), I was half-owner of the magazine. That was a bit weird.

"Back to the Land" is also included in my collection, Hazmat & Other Toxic Stories.

Back to the Land

The house stood alone on the side of the hill, shaded by great oaks, a thousand feet back from the road at the end of a long driveway that had once been graveled, but was now just mud. The roof and the porch sagged, like swaybacked horses; the shutters, most of them still functional, were closed and latched across every visible window but two, one upstairs and one down, that Matthew placed as the front bedroom and the parlor.
Here and there clapboards hung by one end, or had fallen away completely, and no paint remained anywhere, only the bare grey wood.
The yard was mostly weeds and kudzu now where the lawn had once been; the forsythia, untrimmed, had grown into great twiggy arches on either side of the porch.
Matthew stared at the place through the autumn drizzle that misted the windshield, and wondered how his mother could stand living there. 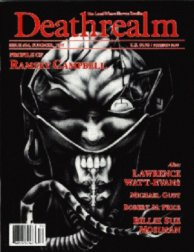